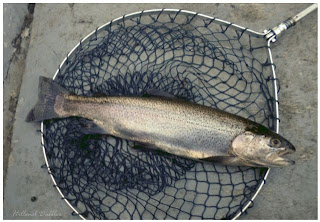 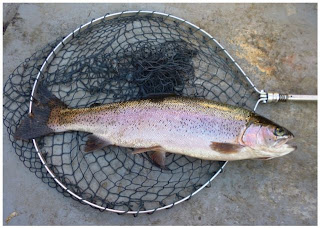 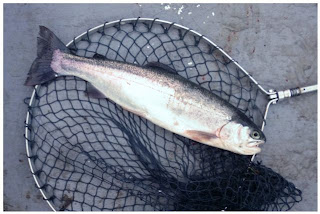 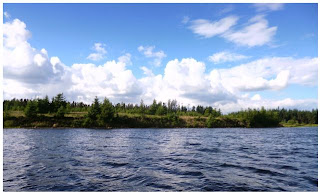 Last night I made my long awaited first visit to the Black Loch. I had been meaning to fish this venue for a couple of months now after hearing all about the good reports from it although I had heard these last few weeks have been difficult, probably due to the high temperatures and bright sunshine.
Scott and I booked an evening session on the boat from 5pm to 10pm. We fished for a few hours trying different areas of the loch without success apart from one moment when Scott got a savage take and the fish broke his three fly cast.
It wasn't until around 9pm when the real fish action started. fish were heading and tailing and rising to various flies on the surface. We decided to gink up our flies and pull them across the surface but we soon realised that the trout seemed to like to have a go at them when we left them static on the surface.
We had numerous takes and rises to our flies for the rest of the evening, Scott was first to net a fish it took his dry sedge pattern with an almighty splash and the fight was on. The fish weighed in at an impressive 3lb.
Still the takes and rises continued until eventually I managed to hook and net my first trout from the Black Loch. The trout weighed in at 2lb and was fooled by a G&H Sedge fished static in the surface film. a short time after I hooked and landed my second trout of the evening another fish around the 2lb mark which was fooled by my dropper fly which was a daddy long legs. It was beginning to get dark when we decided to motor the boat back to base and report that the boat caught three fish, two for the Dabbler and One for the Tiddler.