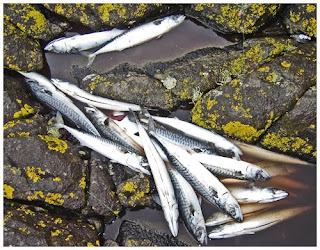 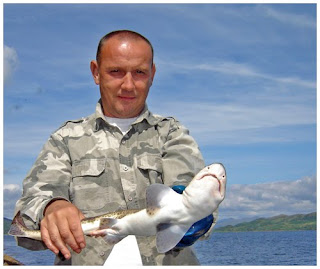 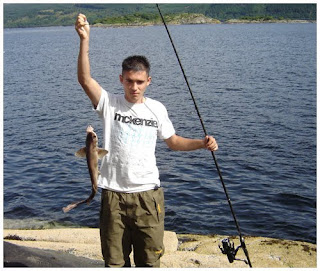 Due to technical problems, it's only now that I have been able to get up to date with my blog.
Last Friday Tam, a work colleague, and his friend's son and I decided to swap freshwater for saltwater and made the two hour trip into the heart of beautiful Argyle for a spot of mackerel fishing or whatever else fancied what he had on the end of our lines.
Loch Fyne was our destination but I will not be forthcoming with the exact location as it's a beautiful unspoilt mark. I have known about this place for a few years now and would hate to see it ruined like so many excellent mackerel marks do once they are widely known.
On arrival at our destination we were met with a flat calm which unfortunately meant the midges were out but to our advantage the tide was in , which was probably the reason why Tam and young Alan were into fish with their first casts of the day. As usual I was last to connect with the fish ten or fifteen minutes later. After an hour or so the mackerel catch was mounting. We then decided it was time for a break and used some of the fish as bait to see if we could get any Dog Fish or anything else that came our way. As we sat back and waited for that always exciting twitch of the rod,Tam set about getting the BBQ ready for our breakfast.
while Tam was cooking and preparing the rolls on Sausage I hooked and lost a Doggy but managed to land a crab and Young Alan caught the first of his five dog fish.
After breakfast Tam got in on the doggy action, which he most enjoyed.
We then switched back to the feathers and spinners and spent the rest of the day catching plenty of fish which were going to be shared among friends and relations.
We called it a day at around four o'clock. We made the journey back to Lanarkshire sun burnt , tired and exhausted but happy in the knowlege that we had a FYNE DAY!