Lucky at the Lily Loch 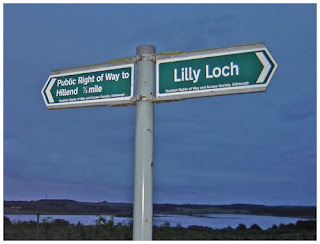 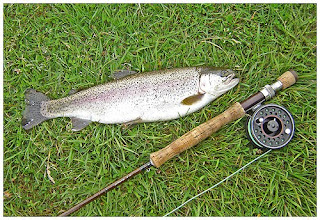 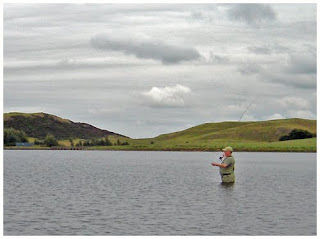 Decided to go up to the Lily Loch tonight with my friend Tam. We met at the car park opposite the Owl & Trout at about 6 o'clock then walked along the right of way over the hill to the loch. We decided to go up to the west end of the loch. It was a good choice as I caught my first trout of the night in this location. There was the odd fish showing now and again , then when I saw a fish rise close to the weed beds I cast over it. The fish turned at my fly then a few seconds later it came back and I was into my first fish of the evening. It was very rewarding to see that it had taken a half hog hopper that I had tied this afternoon.
We then decided to move round to Scunner's Point. Once again there were fish rising intermittently. We fished on as an aeroplane made an appearance over the Loch it flew right round the loch a couple of times then just when we thought it had gone for good it came flying in over the Loch right over Drumfin Hill and along the south shore I thought it was going to land in the field it was that low then it swooped up to gain height and it was gone. Unfortunately I was wading at the time and had no time to get my camera to capture these dramatic events.
We fished on and Tam was soon into a fish, a rainbow of about 2 1/2 pound caught on a Loch Ordie. Just as he was playing it out I hooked into my second trout of the night which fell for the Clan Chief variant that I tied yesterday after watching Davie McPhail demonstrating one on his on-line channel.
Soon after, the Loch went flat calm just like a sheet of glass. We then called a halt to the fishing and walked round the Loch and back over the hill to the car park.
I had a very thoroughly enjoyable evening fishing in the very good company of my friend Tam. I will have to get him to fish my Loch......Hillend, next time we are out.